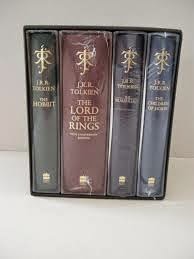 J. K. K. Tolkien's The Lord of the Rings series and its companion volume, The Hobbit has delighted readers for over seventy years. There have been many imitators, but nothing equals the originals. These are stories to be treasured among the greats.
I discovered them late in life, as when I was working with young adults they were into Edgar Rice Burroughs' Galaxies stories and I had little time for personal reading.
There is little reason to summarize each title as the stories are imprinted in the minds of readers and movie fans. The movies are masterpieces of film photography and adhere closely to the original story line.
The books are enchanting for readers of any age and maybe should be read about once every decade to indulge in the skill enchantment of words.
If you've never read them you are in for a treat of verbal images, power of language, and creative story wise. If you have read them savory them again to discover the fine art of story telling.
Nash Black, author of Cards of Death.
Posted by Unknown at 1:36 PM 1 comment:

2015 brought changes that have either been long desired or frequently dreaded, a major change has been in how we view four letter words. No one gasps in shock when they hear a vulgar expletive. The words sound as if they are coming though the cracks of the restroom door when grade school kids try prove to each other how tough they are. It is so common no one pays the least attention.
Transmutation is a four syllable word that means "to change from one form to another." The four letter words I'm going to discuss are not crude expletives, but common ones we hear everyday and seldom pause long enough to study their meaning.
During 2015 the citizens of the United States grasp a litany of hope for a change in their circumstances. Reality cast a heavy hand as work became the goal for millions who had lost their jobs in industries that may never rise again. It was sometime in the late 1970s when the greatest manufacturing nation in the industrialized world changed from a producer of goods to a conveyor of services. This in-of-itself is the breaking point of a consumer economy because production of goods builds a strong foundation thereby creating wealth. The consumption of services has no intrinsic value.
We ended 2015 in a state of confusion as to how to attempt to recover from the staggering debt fostered by our government in a frantic attempt to perpetrate a myth of prosperity.
The population who learned to acquire what they want on borrowed money is now faced with living with the prospect of witnessing their government in default into bankruptcy.
2016 is a new year when we Americans must look within ourselves not with fear of the future in our eyes, but to care in our hearts for our county. so the gift our ancestors gave the world will not be transmuted into take from out neighbors.
Benjamin Franklin is credited with saying it this way, "We given you a gift, but it is up to you to keep it."
My wish to you for 2016 is to learn and know the meaning of many four letter words.

I dedicate this essay to the late Robert Ritche who once told me, "Blackie, I know you speak formal, standard, colloquial, and street English, but would you please not use them in the same sentence." I don't think I have, but then I've mellowed with the years though I still use four letter words. A friend describes it as my "potty" mouth.

Posted by Unknown at 7:55 AM No comments:

Personal Effects Chronicles: A mid Week Funny: Just The Way It Is:  A goofy acting guy comes in the store. He points to a book I have on laying on a blanket box.  Man: Boy, that&...
Posted by Unknown at 5:18 AM No comments:

Vengeance in My Heart 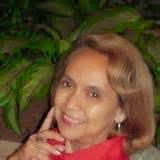 L.C. Hayden's second installment in the Aimee Brent series is Vengeance in My Heart. Aimee paves a dangerous road for herself when she leaves Rich Cole and South Lake Tahoe to trace the man who murdered her mother.
The man she seeks is her biological father who today is rich and powerful with many employees who execute his commands with little regard to the consequences. He will stop at nothing to wipe his past clean when he is ready to move on the a new life under a different name. Aimee is at the top of Lee's list of expendables from his past.

Their purposes collide when Aimee's reporter skills bring her to Los Angeles to Disney World following the lead of a twenty-year old photograph of her father standing in the background of a picture that was taken at the famous theme park. The photo was taken months after he had supposedly drowned in a boating accident.
A master technician of voice, pace, place, and plot Hayden weaves a mystery of adventure and suspense.
Vengeance in My Heart should come with a warning label: Do Not Read in Bed. This title does not permit sleeping until after the reader reaches the final page. The bags under my eyes from lack of sleep are so puffy my glasses are resting on them.

Nash Black, author, Games of Death.
Posted by Unknown at 9:21 AM No comments:

Under the Apple Boughs and Batch Magna 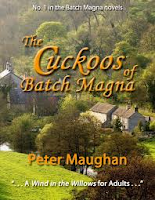 Peter Maughan's Batch Magna series has the marvelous charm of a landscape painting, a moment caught in time, but Peter draws with words. Images that move in rhythm with the currents of the river that flows through the land.
When the troubles of the world become too much to endure escape into a land that may not exist, but should for everyone to enjoy. You will enjoy your visit and hoard each vivid phrase.
The Cuckoos of Batch Magna is where the reader is first introduced to the delightfully unique characters who dig a hole in your heart. They reside on the Cluny River in derelict paddle wheelers. Their view of life is that of an endless summer when the reality is held at bay for a few brief hours.

"River talking ... you could put the world to rights and change your life, or somebody else's, several times, all before breakfast."

Their lifestyle is extreme casual and frequented by 'jollies' on whichever old boat one happens to pass. Who would want to disturb the peace and tranquility of their home with 'change?'
The river people must cast loose their moorings when Humphrey Strange (American) inherits a title he knew nothing about and
heavily mortgaged land, with tenants who don't pay their rent in a world beyond his comprehension until he finds that yes, he does want to be the 9th baronet of Batch Hall.

Meet Sir Humphrey in the sequel Sir Humphrey of Batch Hall, has discovered love and taken up living in his ancestral home even though the walls are molding, the roof leaks, and the taxes must be paid. Now that he has found his baronial home place, he will fight to the death to protect it even against the evil which threatens to invade and seize his land by "a road to nowhere in particular, and in no particular hurry to get there."
Miss Wyndham, the village spinster, comes into her own as she 'frantically flaps her hand' to shush a wren whose song might betray her presence as a sleuth in Cutterbach Woods. 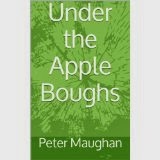 Polish the novels off with the outstanding baker's dozen essays that will take you though a year of village life. Detailing each season with their lyrical story telling of birthing, living and growing, harvesting and dying for humans and the land.
The pieces in Under the Apple Boughs will draw you back again and again to read and savor as one does a cup of well-brewed tea, a steaming mug of coffee, or a goblet of vintage wine.

As Peter observes, "Time. We are tied to it from birth and burdened with its future as well as its past."

Peter Maughan's books are available in Kindle editions. Visit with him on Twitter @PeterMaughan and http://www.batchmagna.com.
Nash Black, author of Cards of Death.

Writing as a Small Business

Indie Award Finalist. A collection of ghost stories from the Cumberland foothills.

Some of the books reviewed in this column have been received as advance review copies (ARCs) and they have a notice as such on the cover. This note is to comply with Federal Communications Regulations.